The trouble with the countdown to the London 2012 Olympics is that it’s a constant reminder of how many days I’ve got left until I’ll be running the 100-mile ‘Ultra Tour of the Lake District’. Today it’s 100 days to the Olympic opening ceremony, which means that I’ve got 100 days left to catch up on training, stock up on calories – and try to rope in some sponsors to make attempting to run those 100 miles worthwhile.

Which is why I decided it's about time I did something about it.

That 'something' includes an occasional return to blogging. So, for anyone who is interested in why I don't spend too much time on here any more - something to do with an Olympic-year challenge of running 2012 miles in various events in 2012 - my Plattfooted blog is the place to go.

Breaking my long silence on here, this woman says what I've longed to hear these past few days

That's the easy bit done. This summer I entered the Lakeland 50, which was by some measure the toughest run I've ever done. Today I put my name down for the Lakeland 100, which is actually 103 miles and reckoned to be more than twice as hard. I now have over nine months to prepare/regret my decision. Last year's winner, Stuart Mills, reckons that 'the key to performance is simple, remain positive, do not let any negative thoughts develop'. He clearly hasn't been watching the Conservative Party conference.

Next time you’re asked what savings you would make to reduce the budget deficit – for which read what services you would cut – be bold. Answer: none. We don’t need to make any cuts, not a penny.

Even if you accept the dubious premise that we have to take action to reduce the budget deficit now, before the economy’s safely out of recession, there’s more than enough money around to make the draconian adjustments announced in George Osborne’s June budget. And we can make them without a single penny being taken away from public spending or a single person being any less well off than they were last year.

Fanciful? Only if you believe that the ever-accumulating wealth of the few hundred people who have most in our society must forever remain untouchable, even as the modest incomes and spending of the many millions who have least are pared to the bone.

In fact, we can balance the books of Britain’s public finances in a way that would affect no more than 1,000 or so people at most – and even they could be left massively better off than they were in 2009. Just do the sums.

George Osborne’s avowed objective is to reduce the budget deficit from £149 billion in 2010/11 to £116 billion in 2011/12. That’s a lot of money taken from you and me. But £33 billion is barely two fifths of the increase in personal wealth enjoyed by the 1,000 richest people in the UK last year.

According to the Sunday Times Rich List 2010, the top 1,000 saw their fortunes rise by £77 billion on 2009. Half of that would pay for all of Osborne’s budget measures, with a few billion to spare – and it would still leave the super-rich £38.5 million apiece better off on average than in 2009.

If we’re really ‘all in this together’, as David Cameron likes to insist, that’s the sort of pain I’ll be prepared to share. 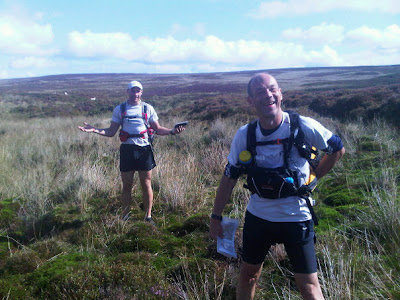 Back in London after successfully completing the six-day, 156-mile TransBritain ultra, amazingly feeling stronger and getting faster as the race went on. I even managed to come joint first in each of the final two stages, so I'm delighted with that.

I also discovered on getting back home that I got third place in my age group in the Regent's Park 10k summer series, for which I win £15, free entry to the next series (worth £60) and a medal! So there must be life in the old bones yet.

Lee Chamberlain, who won the TransBritain and is going for the John O'Groats to Land's End running record at the beginning of November, has done a report of the event. That's his photo (above) of me and Steve Keywood, who came second, lost in a bog on the last day.

I'm still raising sponsorship for Teach Africa and Cystic Fibrosis Trust. Thanks to everyone who has donated already - and you can do so here if you want: 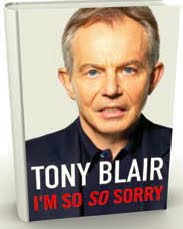 Tony Blair’s unwillingness to say ‘sorry’ over Iraq is now so firmly entrenched that it has become part of his character armour. But he does use the word – 38 times – in A Journey.

He says he is ‘sorry about what happened’ to John Prescott over his fist fight with a fox hunter during the 2001 election campaign. He is ‘desperately sorry’ about the death of Roy Jenkins. He is ‘very sorry’ to lose Alan Milburn as a minister. He is ‘really sorry’ for David Blunkett over the affair with his secretary that sees him turfed out of office. He even says he ‘felt genuinely sorry – no, I really did’ for Jacques Chirac when London won the 2012 Olympics bid over Paris.

My favourite TB ‘sorry’, though, is the one he feels for junior defence minister Tom Watson after Watson signs a round-robin calling for Blair’s resignation in September 2006. ‘I have heard from the media that Tom Watson has resigned,’ Blair declares in a gloriously petulant official statement before announcing that he ‘had been intending to dismiss him’ anyway. ‘Actually, later I felt sorry for him and regretted I had done it,’ Blair writes in A Journey. You can almost see where his tears have left their mark on the page.

There are, according to a crude count done on my bootleg ebook, 5,843 uses of the word ‘I’ in Tony Blair’s account of his years in office, A Journey. If you include his 1,172 uses of the word ‘my’, 992 uses of ‘me’ and the many hundreds more instances when he refers to himself in the third person, it works out at about one mention of the author in every other sentence. And that’s not counting the 2,478 times he talks about ‘we’, often royally.

That’s some going, even for an inevitably self-serving political memoir – or, as Blair himself cringeworthily prefers, ‘letter (extended!) to the country I love’. (His use of exclamation marks, incidentally, isn’t quite as extensive as some reviewers, such as Andrew Rawnsley in the Observer, have suggested: a mere 50 all told, well short of 21st-century textspeak standards.)

Three of Blair’s first-person references appear in one telling sentence – the one you fancy he would pick as his epitaph if forced to make a choice. ‘All I know is that I did what I thought was right.’

Blair’s repeated return to this simple refrain suggests that Labour’s most successful ever leader (‘I won three general elections. Up to then, Labour had never even won two successive full terms’ – note who did the winning) still doesn’t understand what most of us learn at primary school: that doing what you think is right is not actually good enough if you happen to be wrong. ‘Please miss, I really did think it was right to set fire to the classroom when that nasty bully wouldn’t go outside.’

I don’t suppose there is a leader in history who consciously did what he thought was wrong. There’s invariably some form of philosophical contortionism that will provide apologias for the gravest of crimes. Tony Blair’s – and the world’s – tragedy is that a little less emphasis on the ‘I’ and a little more listening to others could have led to him doing what was right and not just what he thought was right.

The state Will's in 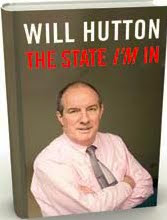 I’m getting increasingly irritated by the recent self flagellation of the baby boomer middle classes. Francis Beckett (65 in May) started it with his What Did the Baby Boomers Ever Do For Us – How the Children of the Sixties Lived the Dream and Failed the Future, published in July. Since then a shedload more of them have been jumping on the bandwagon, with ex-Observer editor Will Hutton (60 in May) one of the latest leading the charge.

Hutton’s mea culpa has him plead ‘guilty as charged’ in a self-indulgent Observer piece toying with his angst at turning 60. ‘Having enjoyed a life of free love, free school meals, free universities, defined benefit pensions, mainly full employment and a 40-year-long housing boom, [the boomers] are bequeathing their children sky-high house prices, debts and shrivelled pensions,’ he writes. ‘A 60-year-old in 2010 is a very privileged and lucky human being – an object of resentment as much as admiration.’

Speak for yourself, Will.

Depending on where you draw the line, I might just qualify as a boomer, though I came of age in the 1970s rather than 1960s, just after the Labour government had told us ‘the party’s over’ and just before punk and the winter of discontent gave way to Thatcher. But apart from the free school meals, I don’t recognise too many of the privileges that Will seems to think we all shared. Precarious employment, a rented flat and no pension is how my share of the spoils stacks up.

Not that I’m complaining. I’m forever conscious of the fact that those of us fortunate enough to have grown up in the west, in the latter half of the 20th century, got a damn good deal historically.

What I object to is this idea of generational privilege. At most 10 per cent benefited from free university education. And only those who were able to buy at the right time in the right places benefited from the property boom. As for full employment, try telling that to anyone who had the experience of looking for work in the old industrial areas at any time from about 1974 onwards.

It’s not a generational thing but, as ever, a class one. So, please, just because you’re one of the minority of baby boomers who went to university, made a fortune from property inflation and got gold-plated pensions, don’t keep talking about everyone else of the same age group as if they shared in the same privileges. Or as if they did nothing to try to make things fairer.

Not much faster than walking

I've done a flat 50-mile run before (along the Thames) and I've done a fair few hilly 50-mile and over walks. But I've never attempted a hilly 50-mile run. So this weekend, as part of training for the TransBritain Ultra in September, I did the Lakeland 50, which is the little brother of the Lakeland 100 event, which boasts (if that is the right word) a 75% drop out rate among enrants.

The 50 misses out the highest Lakeland peaks but it still manages 12,000-plus feet of ascent, or 'four Sca Fells' as a fellow competitor put it. And every bone in my body can now confirm it.

Still, I managed to finish in 13 hours 48 minutes and 46 seconds, despite falling badly before the first checkpoint and going badly astray on the the fells after the last one. 'Not much faster than your walking pace,' according to my daughter. Yeah, thanks Rachel. Next time I'm taking you along.