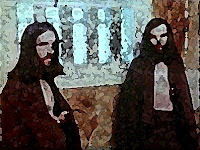 You know how you know when someone’s telling lies? you said. They get their story right every time, down to the last word. Whereas when they tell the truth, it’s never the same twice. They reformulate.


The final issue of The Blanket went online today. The above lines are by Ciaran Carson, the Belfast poet, from ‘For All We Know’, his new verse novel about two lovers who first meet when a bomb goes off nearby. The lines are quoted by Seaghán Ó Murchú, in an article for this last issue, ‘not as an epitaph for The Blanket, but an injunction that we its contributors and readers take from its energy a renewed commitment to put its idealism into activism, no matter where in the world we may be, no matter the medium’.

The Blanket, first published in 2001, was in many ways an unexpectedly truthful ‘journal of protest and dissent’. It originated, unashamedly, proudly, from that wing of the Irish republican movement that rejected the Good Friday Agreement as representing the ‘pulping of Provisionalism’ and the victory of ‘the British state strategy of including republicans but excluding republicanism’, as co-editor and one-time ‘blanketman’ Anthony McIntire puts it in the journal’s final issue.

But The Blanket, published from a small house in republican west Belfast, was never just an outlet for unreconstructed supporters of a continuing war of bombs and bullets against the Brits; and anyone reading it with the expectation of having their prejudices confirmed about the ‘men of violence’ would be confounded. Though it gave a voice to people who in many cases had devoted their lives to the ‘armed struggle’ (and taken the lives of others in the process), it did so in a way that was open, questioning and, by and large, honest. In the words of Mick Fealty, founder of the Slugger O’Toole blog, its greatest value has been to ‘speak truth to paramilitary power’, including the often-inconvenient truths about what was happening in working-class communities in Northern Ireland, from sectarian attacks to punishment beatings, when the ‘bigger’ political priorities of the peace process required that they be suppressed.

The Blanket’s contributors included a number of loyalists, among others. ‘The Orangeman’s handshake’ by Billy Mitchell, published in January 2002, is just one piece that’s worth casting an eye over, for its account of how the IRA’s Peadar O’Donnell came to keep the Orange sash presented to him by his fellow working-class writer, the loyalist Thomas Carnduff, in a glass case in his home until his death. Mitchell writes that the story reminds us ‘that those who have worn the uniform of opposing forces need not live in a state of perpetual hatred, base recrimination and ongoing demonisation. As in the case of Carnduff and O’Donnell, dedicated political opponents are very often kindred spirits who share similar passions and, but for an accident of birth, could have been on “the same side”.’

But The Blanket’s widest interest lay in its articulation of the views of dissident republicans such as Brendan Hughes, the commander of the Belfast brigade of the Provisional IRA during the 1970s and the Provos’ commanding officer in the Maze prison, who participated in a the blanket protest and went on hunger strike for 53 days. He acted as an ideological mentor to the younger Gerry Adams but broke with Adams and the Provisionals after the Good Friday agreement. He explained his reasons thus:

‘I am not advocating dumb militarism or a return to war. Never in the history of republicanism was so much sacrificed and so little gained; too many left dead and too few achievements. Let us think most strongly before going down that road again. I am simply questioning the wisdom of administering British rule in this part of Ireland. I am asking what happened to the struggle in all Ireland – what happened to the idea of a 32-county socialist republic. That, after all, is what it was all about. Not about participating in a northern administration that closes hospitals and attacks the teachers’ unions. I am asking why we are not fighting for and defending the rights of ordinary working people, for better wages and working conditions. Does 30 years of struggle boil down to a big room at Stormont, ministerial cars, dark suits and the implementation of the British Patten report?'

You don’t have to be an Irish republican socialist to be interested in this sort of thing (though it obviously helps). The final issue of The Blanket leaves a gap in the writing about Irish politics that will be missed.

If Brendan Hughes isn't advocating a return to "dumb militarism or war" what is he advocating? What was the alternative to the Northern Ireland peace agreement? Did the Blanket have one? No. That's probably why it closed down.

I spent some time looking over the Blanket's website which I hadn't come across before. It's almost hard to believe that some of these people were involved in bombings and shootings on a regular basis. Brendan Hughes was supposed to have been the most "effective" commander the IRA had, by which is meant he killed most British soldiers. Yet me, a "prod" and a unionist who left Belfast because of the war that the IRA carried out, could still identify with a lot of what he had to say. I still can't forgive him though for all those wasted lives, including his own.